The defensive capacity of Georgia was reviewed in Washington

The defensive capacity of Georgia was reviewed in Washington 7 December, 2019  22:33 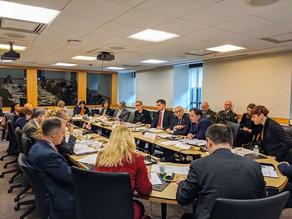 The meeting of the Defense and Security working group of the USA-Georgia Strategic Partnership Charter Commission was held in Washington. The parties discussed all important issues of the USA-Georgia bi-lateral agenda for defense and security. They discussed the concrete steps and plans aiming at deepening the current cooperation.

Particular attention was paid to the Frame Agreement of Georgia and the USA cooperation in the field of security, signed in November 2019. The mentioned document defines the common goals of the USA Defense Department and the Ministry of Defense of Georgia.

According to the information of the Ministry of Defense, the American party condemned the occupation of Georgian territory and confirmed its sovereignty, independence, and territorial integrity in the internationally recognized borders. The USA confirmed the active involvement in the process of peaceful regulation of the conflict in the frames of Geneva International negotiations.

The participants discussed the progress made by Georgia on its way to Euro-Atlantic structures’ partnership, including NATO-Georgia’s essential package implementation and the contribution of the USA in the process.

The delegation from the Georgian side was headed by the First Deputy Minister of Foreign Affairs and the meeting Co-Chairman, Vakhtang Makharoblishvili, and the First Deputy of the Ministry of Defense, Lela Chikovani. The other members of the executive and legislative state bodies were representing the delegation. The meeting from the USA side was represented by the Assistant Deputy State Secretary of Politics and Military Issues, Joel Star, and the Assistant Deputy State Secretary of Russia, Ukraine and Eurasia Defense Issues, Lora Cooper.