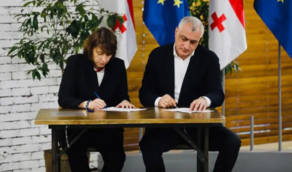 Today, Elene Khoshtaria _ Droa and Lelo for Georgia political parties have signed a Memorandum of Cooperation.

According to the parties, the main objective of the cooperation is to unite political forces, professionals, and people with shared values to create a European style and balanced form of governance.

a) change the existing situation to the core;

b) end fear, hopelessness, and lack of prospects;

c) end conflicts, hate speech, and their eagerness to trample on people's dignity;

e) give people a belief that their voices matter, and they can change governments via elections;