Ugulava says either Kobakhidze or he will have to shave head 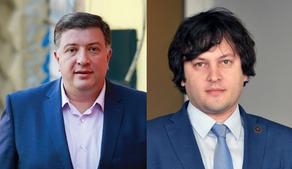 Leader of the European Georgia party Gigi Ugulava says that the Georgian Dream will be sitting in the parliament on 11 December alone, and Irakli Kobakhidze is mistaken as he thinks the opposite.

Ugulava offers Kobakhidze to bet. "I need a haircut now, and Kobakhidze always needs it, which is why I want to bet on it. If on 11 December, what I am saying happens, Kobakhidze will have to shave his head. If I lose, I will.

Kobakhidze has said that the Georgian Dream will not be alone in the parliament on 11 December, has he not? I am saying it will," Ugulava told the Mtavari TV.

Today, the fourth round of negotiations was conducted between the ruling and left-wing parties. After the meeting, the representatives of the left-wing parties said that their position remains unchanged, and they do not plan to enter the parliament.

The first session of the parliament of the 10th convocation will be held on 11 December. President Salome Zurabishvili will open it.