Diego Maradona's brother dies at the age of 52 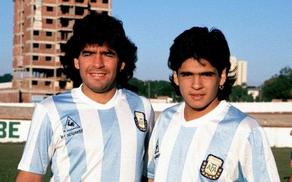 The younger brother of football legend Diego Maradona, Hugo Hernán Maradona, has died. According to Report.ge, the information is spread by Marca.

He died at the age of 52 at his home in Naples.

According to the preliminary version, the cause of death was a heart attack.

Hugo Hernán Maradona was a footballer like his older brother. The former midfielder has played for clubs in South America, Europe, Japan, and Canada throughout his career.