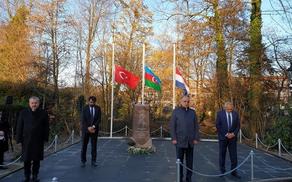 A memorial in memory of the Khojaly genocide victims was installed in The Hague, The Netherlands, on February 26.

They had a moment of silence in memory of the victims and laid wreaths on the memorial.

The officials noted that the Khojaly tragedy is a tragedy for mankind.

Twenty-nine years have passed since the Khojaly genocide.