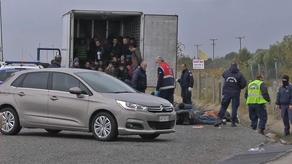 As CNN reports, police have found 41 people alive in the back of a refrigerated truck during a routine highway check in northern Greece, officials said Monday.

The refrigeration system had not been turned on and the migrants, all men and boys, were uninjured, Theodoros Hronopoulos, a police spokesman, told CNN.

A small number of the migrants were taken to a nearby hospital for precautionary reasons, while the rest were taken directly to a nearby police station for identification.

A Georgian truck driver, 40,was arrested, police said. Routine checks on trucks and other vehicles have increased lately, following a number of incidents involving migrants being smuggled through Greece in the back of vehicles.

Similar incidents have also taken place in other countries too.

Belgian police found 12 migrants alive in a refrigerated truck at a motorway parking area in northern Belgium on Oct 30.

The customs officers found 8 frozen migrants in a truck in Calais, ferry port in northern France on Oct 28.

British police found 39 bodies in the truck, including one minor on Oct 23.