Soldiers are mobilized in streets - situation in Minsk 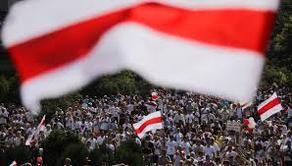 The protest demanding the repeat elections continue in Belarus. A New Belarus March is planned today at 14:00 on Independence Square. Local media company Belsat reports that people noticed water cannon machines in the streets. According to Euroradio, busses full of law enforcers are mobilized in the city center.

Nasha Niva reports that the metro stations in the city center are closed.

The Defense Minister, Victor Khrenin, made a shocking statement: "We cannot watch our citizens organize an act under the flags of the Nazis, who slaughtered Belarussians, Russians, Jews, and people of other nationalities."

The army protects all memorials and monuments of the Second World Was. In case the monuments are damaged, the army will act, not the police.

Twenty-six more people were arrested during the last day and night.

The man missed in the protest march on August 12 was found dead today in the forest close to Minsk.

Officially, three people are killed in the anti-government protest in Belarus.

On August 9, presidential election results were publicized in the country, with this followed by mass protest actions. The opposition does not recognize the 80% votes victory of Lukashenko. People took to the streets and protested against Lukashenko's government.