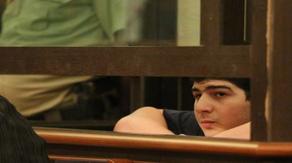 Mikheil Kalandia, accused of the murder of Davit Saralidze on Khorava Street, was found guilty and sentenced to 11 years and three months in prison.

The protests from Kalandia's family followed the judge's ruling. According to Tengiz Kalandia, the father of Mikheil Kalandia, the Court made a politically motivated decision.

Mikheil Kalandia got arrested on June 4, 2019, after nearly two years of investigation into the murder of David Saralidze.

The trial of Mikhail Kalandia on the Khorava case ended on February 21.

The defendant Mikheil Kalandia used the right to speak at the trial. Kalandia claims he is innocent. He asked the prosecutor if he was ready to send an innocent person to prison.

"The Ministry of Internal Affairs did its best to obtain false evidence. I don't know who needed this. I'm ready to go to jail, but my main goal is to find out the truth. Everyone will learn the truth. The main thing is to stay true to myself," Kalandia said.

Law enforcers detained Mikheil Kalandia on June 4, 2019, for the murder of Davit Saralidze in aggravated circumstances on Khorava Street. He remanded in custody on June 6.