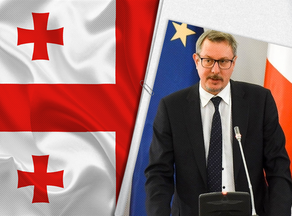 "Today, the de facto authorities in the Georgian breakaway region of South Ossetia have extended the illegal detention of Mr Zaza Gakheladze for a further twelve years and six months.

The European Union calls for the immediate release of Mr Gakheladze.

Since his illegal detention on 11 July 2020, the EU has been urging his prompt release, including through the Hotline managed by the EU Monitoring Mission, within the framework of the Ergneti Incident Prevention and Response Mechanism (IPRM) and the Geneva International Discussions.

In this context, the European Union also reminds the Russian Federation of its responsibilities in line with the judgement of 21 January 2021 of the European Court of Human Rights.

The EU strongly supports Georgia’s sovereignty and territorial integrity within its internationally recognised borders, and will continue addressing the human rights and security situation of the conflict affected communities living alongside the Administrative Boundary Lines in the framework of the Geneva International Discussions and in the IPRM meetings," Carl Hartzell's statement reads.

The so-called court of the occupied Tskhinvali region has sentenced Georgian citizen Zaza Gakhaladze to 12 years and six months behind bars.