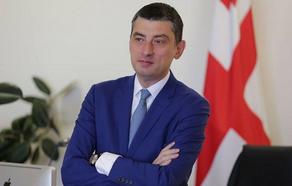 Former Prime Minister Giorgi Gakharia has published his next post on Twitter, saying that he is now working on his political agenda.

"Today I declared that I am staying in politics of Georgia. Currently, I am working on defining my political agenda. Georgia needs elimination of political polarization and elaboration of the real agenda for its European future," he tweeted.

Mr. Gakharia has made his first public appearance after his resignation today.

The former PM told journalists that he has no plans to go anywhere.