"I will continue my efforts to facilitate Gaprindashvili's release" 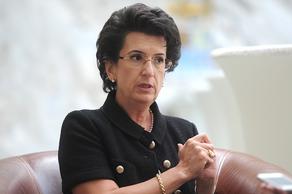 "I will continue my efforts to facilitate the process of Vazha Gaprindashvili's release," leader of the Democratic Movement – United Georgia Nino Burjanadze declared.

Once again, I confirm that at each meeting which I attended in Russia, Russian politicians showed their readiness to ensure Vazha Gaprindashvili's immediate release. This was reconfirmed by Russian Deputy Foreign Minister Rudenko in Geneva. Their move to conduct the court trial on Friday, i.e., earlier than planned, made me think that the process would have been accelerated. Some further issues appear to have surfaced at the court session, impossible for me to foresee.

Burjanadze said that at each meeting in Russia, she focused on the issue of Gaprindashvili and started each meeting with precisely this matter. According to her, she expected that the doctor would have been freed on Friday, Dec 13.

Renowned Georgian doctor Vazha Gaprindashvili has been held in custody since Nov 9.

The de facto government charged Gaprindashvili with an illegal entry of the region; however, the doctor refuses to plead guilty and asserts that he is in the territory of Georgia.