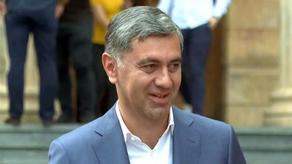 Ivanishvili has failed to deliver on the only promise which was easy to keep: to jail us for a really long time, leader of the Victorious Georgia party Okruashvili said, adding that his and Ugulava's imprisonment, as well as the release, is a political decision.

In Mr. Okruashvili's words, now Giorgi Rurua has to be freed for the agreement to be deemed performed.

Okruashvili thanked the U.S. and European Union Ambassadors for their contribution to freeing the prisoners.

Former Mayor of Tbilisi was charged with embezzlement and arrested on 10 February 2020. He was sentenced to three years and two months in prison.

Irakli Okruashvili, the leader of the Victorious Georgia party was accused of organizing violence, leading, and participating in it. He was arrested on 25 July 2019 and sent to jail for 5 years.