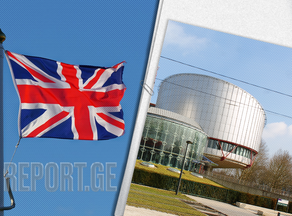 The United Kingdom salutes the judgment by the European Court of Human Rights in the case of Georgia vs. Russia, according to which Russia is responsible for murdering, torturing, and forcing citizens to move from one region to another.

"Russia must recognize and respect Georgia's sovereignty and territorial integrity and fulfill its obligations under the 2008 ceasefire agreement," the statement by the Embassy reads.