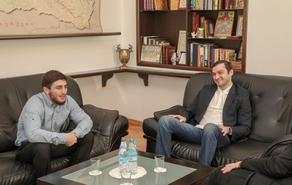 Governor of the Autonomous Republic of Adjara Tornike Rizhvadze held a meeting with Georgian wrestlers and congratulated them upon competing successfully during the European championship.

He posted on Facebook that the Georgian wrestlers were successful.

“I congratulate Shmagi Bolkvadze on becoming the European Championship and Leri Abuladze on a bronze medal.

I wish them success!” He said in his post.