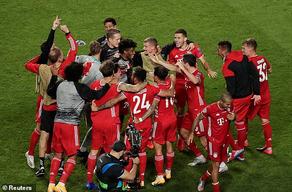 Bayern Munich are European champions for the sixth time in their illustrious history, foreign media say.

The 2020 Champions League final might not have been the classic it was billed to be, but that didn't stop Bayern from asserting their dominance over the continent with a 1-0 win in Lisbon.

Kingsley Coman, an unexpected starter for Bayern, popped up with the winner against Paris Saint-Germain when he headed home Joshua Kimmich's cross midway through the second-half.

Givemesport.com reports that ‘Bayern captain Manuel Neuer helped his side secure a clean sheet with a stunning performance between the sticks, making crucial saves to deny Kylian Mbappe and Neymar.’

There were wild scenes of celebrations at full-time, too, as Bayern became the first team to win the Champions League having emerged victorious from every game they've played, Givemesport.com reports.