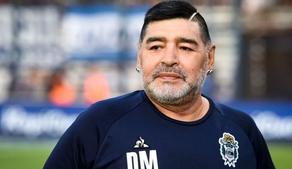 Argentine football legend Diego Maradona has passed away at the age of 60 after suffering a heart attack.

The Gimnasia coach had been hospitalised at the start of November, days after celebrating the landmark birthday, after complaining of low spirits and fatigue.

Tests at the La Plata clinic revealed a blood clot on the brain, which doctors later revealed was operated on successfully.