Football academy to be built in Georgia's Kutaisi municipality - PHOTO 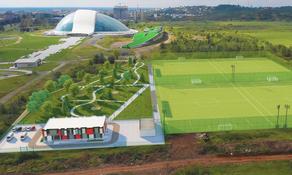 A football academy is set to be built in the vicinity of the former parliament building in Kutaisi. The Football Federation project envisages the construction of four standard pitches, with two of them artificial and two natural grass pitches.

Football Federation President Levan Kobiashvili says that the academy will be the football center of the Imereti region and entire Georgia. In his words, the implementation of the project will foster the development of football in the country.

A residential apartment building with changing rooms, diners, conference halls, and gyms, is also planned to be constructed.

After the completion of the project, U-14 and 15 teams of the Georgian Football Federation Imereti Academy will have access to the infrastructure.