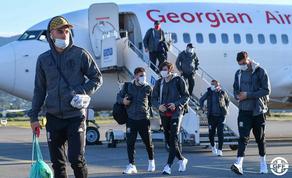 Georgian national football team left Batumi for Pristina on a charter flight operated by Georgian Airways on a Boeing 727. After circling for about 40 minutes, the liner finally landed safely at Pristina International Airport. The reason behind the delay is still unknown.

The confrontation between the national teams of Kosovo and Georgia will start today, October 12, at 22:45 Tbilisi time.