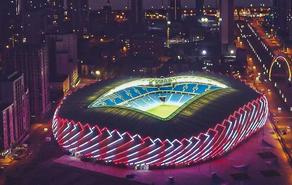 "The Georgia-Kosovo match scheduled for September 2 in Batumi will be held without spectators," said Giorgi Ghibradze, the Chief of Operational Staff at the Interagency Coordination Council.

"According to the decision of the Coordination Council, within the framework of the qualification stage of the World Cup, the football match between the national teams of Georgia and Kosovo, scheduled for September 2, at the new stadium in Batumi, will be held without spectators. The same will happen to all other sports events," Ghibradze said.