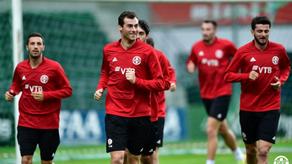 The Georgian National Football team has won 1:0, over Estonians in the first match of the UEFA League. Nika Kacharava scored the only goal on the 32nd minute of the match in Tallinn.

The Vladimir Weis' team plays the second tour march with the North Macedonian team on September 8 in Tbilisi.

At UEFA's decision, the National Teams' matches are held without the audience due to the coronavirus pandemic.