Georgian U23 team defeats Russia in the final 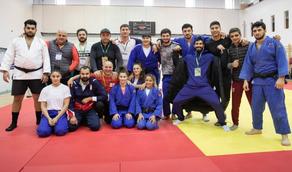 The Georgian national team won the mixed team competition (girls and boys) for the first time.