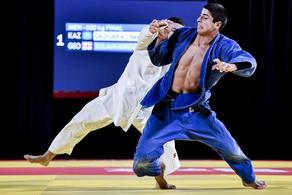 18-year-old sportsman was defeated by the Japanese, Kamagaki Kazunari.They competed in the category of up to 100 kg.By this result Japan owes the gold medal and is leading.The National Team of this country got 6 wins.It is followed by the Georgian National team with the 3 gold medals won by Vladimer Akhalkatsi, Lasha Bekauri and Eter Liparteliani.

The World Judo Championship started on October 16 and will last a few more days.