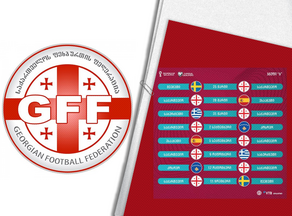 "Georgian national football team will start the matches of Group B of the World Cup qualification stage with a match against Sweden," the official website of the Football Federation spreads the information.

The draw for the World Cup's qualifying round in Qatar was held on December 8 in the Swiss city of Zurich. The match calendar became known today. The Georgian national team will have a total of eight matches at the qualification stage.