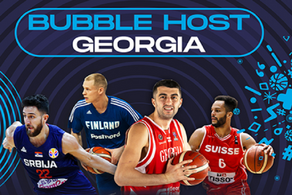 Georgia will host the last window of the qualification stage of the 2022 European Basketball Championship, which will take place at Tbilisi Sports Palace.

Upcoming matches represent a qualifying round for Eurobasket 2022, during which several young players along with veteran basketball players will defend the dignity of the national team.

As one of the host countries of Eurobasket, Georgia is guaranteed to compete in the European Championship, but nevertheless, our team is the leader in Group E of the qualification stage.

According to the "bubble" system, all four national teams - Georgia, Serbia, Finland, and Switzerland, will gather in Tbilisi, live in one hotel, and not be allowed to go out. Teams will only move for training and games and will not have contact with each other except on the playing field on the day of the match.

These regulations were set by the International Basketball Federation (FIBA) due to the Covid-19 pandemic.

Georgia will host the Eurobasket in 2022 and the European Under-20 Championship in the summer of 2021. The country has another responsible mission in terms of organization and will host all the February window matches of the Eurobasket qualification stage according to the "bubble" principle.