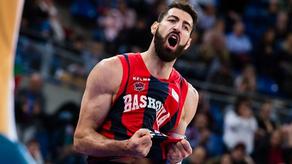 The Georgian Basketball National Federation has released a statement on Georgian forward Tornike Shengelia's decision to join the SCKA Moscow.

"The Georgian Basketball National Federation is certain of the fact that irrespective of a club he joins, Tornike will always stand by his national team and his country.

The Georgian Captain will repeatedly make us proud of his successful sports career and will help the Georgian National Team achieve significant victories!"

Tornike Shengelia has signed a three-year contract with the SCKA Moscow.