Pele mourns Maradona: 'We will kick a ball together in heaven' 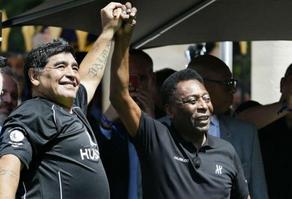 Three-time world champion in the Brazilian national team Pele, commenting on the death of the former captain of the national team of Argentina Diego Maradona, said that they would play football in heaven one day.

On Wednesday, Maradona’s death was announced at the age of 60.

“Certainly, one day we will kick the ball together in heaven,” Reuters quoted Pele as saying in connection with Maradona’s death.

Maradona was a member of the Argentina national team and won the World Cup in 1986.